One of my favorite desserts has always been ice cream. I really like gelato, soft serve, and danderma ice cream. For a while I have been going to Mado in Bidaa to eat their famous danderma block served on a piece of cold marble. The quality of their ice cream is superb, but make sure you get the ice cream extremely cold to experience the perfect taste. Mado serves both food and dessert, but I usually go for dessert only, because their food is average. 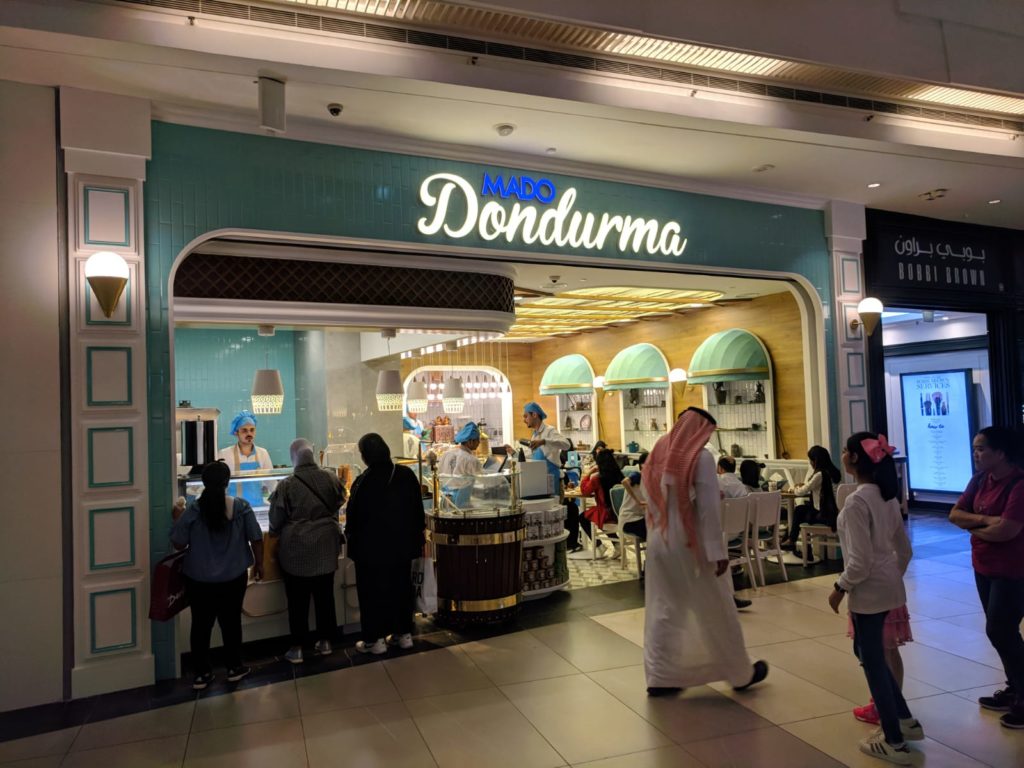 Today while I was walking in the Avenues, I saw Mado Dondurma, which is the same concept, but focused on desserts only. I got the danderma block to go, and sat on a bench and I started eating it. It was extremely delicious and I am officially ranking it the best ice cream in Kuwait period. Try it out and let me know what you think.

I was looking for a while for a vacuum robot in Kuwait, but sadly no one was selling them. From my research, I found out that iRobot makes the best vacuum robots, but the model I was looking for is expensive so I didn’t go for it. One day there was a great deal on Amazon for the Deebot N79 for $160, so I got one. The problem was that the voltage is at 110-120 volts, so I had to buy a converter for 220-240. When I got the converter and setup the N79 via the application on Android, the robot started to go around and vacuum. I was worried that it won’t cross the flooring trims, but it did cross them easily. The main problems with the vacuum is that it gets lost and find a hard time finding the charger, and the other problem is when it get stuck with my cables and rug. Other than that, the device is amazing and it saved us so much time from vacuuming the house. At the Diwaneya, when the guys complain about the increase of cost of getting a house keeper since demand is very high and supply is very low. I smile, because I have my vacuum robot and I am soon getting a mop robot.

Sport is an important component of the Socio-economic development of a country and in Kuwait, the most popular sport played is Football. Even though the popularity of Football is at its highest peak, another sport that has evolved and engaged the masses is Cricket.

Kuwait has been an associate member of the International Cricket Council since 2005, having previously been an affiliate member since 1998. They are currently ranked tenth amongst non-test teams in Asia. In recent years, the popularity of cricket has been constantly rising and is set to overtake Football and may even be Kuwait’s most well-known sport in future. There are many well-reputed organizations who organize cricket tournaments, the most popular being-Kuwait Cricket. The well-known recent tournament was KGL T-20 Premier League which was won by Super-XI team (Division D) on 13th April 2018.

To enhance the bonding between Kuwait and Cricket, Friday Boyz is organizing a grand cricket tournament in Kuwait. Friday Boyz is a dream team of the founder, Aleem Parkar, and organizing this event is a great start to a future cricket career. There will be 24 teams fighting in a knock out match to reach the finals and receive the golden trophy. The proud sponsors of the tournament are Porter Express, Rosha Sugar, Ryukers and LastHalt.

Ryukers, along with the other sponsors, wishes all the best to the participating teams and may the best team win.

I was never interested in reading books until few years ago. It started by buying a book called Rich Dad Poor Dad, which changed my life in terms of investment philosophy. I used to buy physical books, but with time I started to dislike the wait for each shipment to arrive. One day I decided to order the smallest and cheapest Kindle from Amazon, and after using it for less than 30 minutes, I realized that Ebook isn’t for me. I went back to use physical books which I didn’t like, because whenever I see the thickness of the book, I get discouraged. One day, I saw my cousin reading from a very small Ebook, and he was just holding it with one hand. I asked what kind of Ebook was that, and he told me it is Kindle Oasis 1st Gen. I used the device, it was so light, and clicking the buttons made it extremely user-friendly. When I checked it online, the device was pricy, but I gave it a try. The moment I got it, I realized that it is very comfortable to hold, and the battery last for a very long time. Kindle Oasis made reading so much easier and comfortable. All my friends who tried it, loved it so much, and it changed the way they read. Even those who never read books got encouraged to read using Kindle Oasis. It is a device that changes the way you read, and even if you aren’t a reader, you will be interested to read.