There is so much demand for video game consoles during the corona crisis. The highest demand is for Nintendo Switch and then Playstation 4. I am so surprised that Nintendo switch cost about $300 which is around 92 KD before the crisis. Now the world wide stock of Nintendo Switch is so low that caused increase in prices due to demand. Before the corona crisis, Nintendo Switch was selling for 115 KD in Kuwait, and sometimes 106 KD + a game. Now the cheapest price I found was 145 KD at AlFuhod and the most expensive is 169.9 at Xcite. I asked my friends who own stores in Rehab Comples about the reason that Nintendo Switch is selling out. They said parents need to keep their kids quite at this time since they are spending time with them much more than ever. Playstation 4 was at the end of cycle so it isn’t worth the investment right now and Playstation 5 is releasing at the end of the year.

The release of Sony Playstation 5 (PS5) this year will be totally different than previous years, because Sony PS5 will release globally at the same time. Now the big question is where to pre-order PS5 in Kuwait. I honestly don’t want to pay above market prices, which is something I used to do a lot back in the day. Going to Rehab Complex and seeing prices where they switch the original price in $ to KWD and still buy the product will never happen again. The first week of release usually have the highest prices then it drops gradually. Now there will be 2 options to pre-order PS5.

The first option is to pre-order through one of the local stores in Kuwait.

Pricing for the Playstation 5 (PS5) was released and it will cost $499.99 for the one that comes with CD drive and $399.99 for the digital edition. The release date in the US, Japan, Canada, Mexico, Australia, New Zealand, and South Korea will be November 12th, 2020. For the rest of the world including Kuwait & Europe will be November 19th, 2020.

Update: PS5 is selling out everywhere in minutes and sadly they released them before the promised dates. I was sleeping when they released in Amazon US. For Amazon UK, it should have been next week but sold out in the morning and it only lasted 6 minutes

Update 2: Eureka & Best Electronics just announced that they will have Playstation 5 on November 19th, 2020. Sadly no date for when to Pre Order yet. I think even in Kuwait it will sell out very fast, so be ready.

Update 4: To increase you chances of Pre Ordering follow Xcite, Best Electronics, Eureka, and Gamestore on Instagram and turn on notifications, so you get notified when they post. PS5 supply will sell out very fast, so everyone must act fast.

Update 6: All suppliers are sold out online, I will monitor for restock.

Update 7:  and are accepting orders at their physical stores.

Update 8: Suppliers in Kuwait are prepaaring for round 2 for Pre Orders. I don’t know it will be, but they are talking to Sony about it. Also suppliers will have more Playstation (PS5) stock on Launch Day November 19th, 2020. There are suppliers who couldn’t do Pre Orders but they will have PS5 on launch day.

Update 9: You can register your interest for PS5 at Zain, STC, and Ooredoo. Not sure if they will release them on the date of release. AlFuhod mentioned that they will have it on day of release

I have always wanted to create my own video game, but the way to develop is extremely complex. Playstation created a very simple engine called Playstation Dreams to develop video games. I was impressed to see creations like Sonic, Mario, and Metal Gear. All games at the early stages, but the concepts are impressive. Since kids are completely out of school, it is a good time to utilize their talent and create wonderful Playstation games.

Funko distributor has been extremely active in Kuwait. They started with the big players such as Xcite and Fantasy World. Then I started seeing them in Rehab Complex and Trolley. Now they are available on Carriage and it takes about 42 minutes to be delivered to your home. The store that has the best collection is Sharingan at Rehab Complex. They offer most of the Funkos available, which makes buying a collection much easier. Funko and the Kuwaiti distributor will continue to do a great job, because I can see the progress with my own eyes.

Two months ago, I played a really amazing game on PS4 called God of War 4. I spent around 3 weeks playing the game and I can say it is one of the best games ever. Santa Monica studio is an impressive studio, and it is considered one of the main assets for Sony. When I saw the trailer of God of War 4, I was impressed with the graphics and the acting. The clever part is that Sony didn’t show much of the game, so I had no clue what I was getting into. They did set expectations lower than what they delivered and that was a genius move. When I finished the game, I tried so hard to beat the Valkyries and it took me few days to beat them all. One day I played more than 8 hours just to beat the Queen Valkyrie.

Lets see what will I play during this summer.

I started to see Funko Pops around 2 years ago, but it wasn’t really available much. I remember I used to go to video game exhibitions such as Knot, Comic Con, and IGN. The store that sold them was Pro Gaming, and I remember most people were buying from them. Sharingan is another store, but they didn’t focus as much on Funko Pops. Now the availability of Funko Pops has changed so much where it is literally available everywhere. The first place I saw them, and the display was really nice, it was at Fantasy World at the Avenues. When I saw the display, I was really impressed, because it was the coolest part of the entire store. 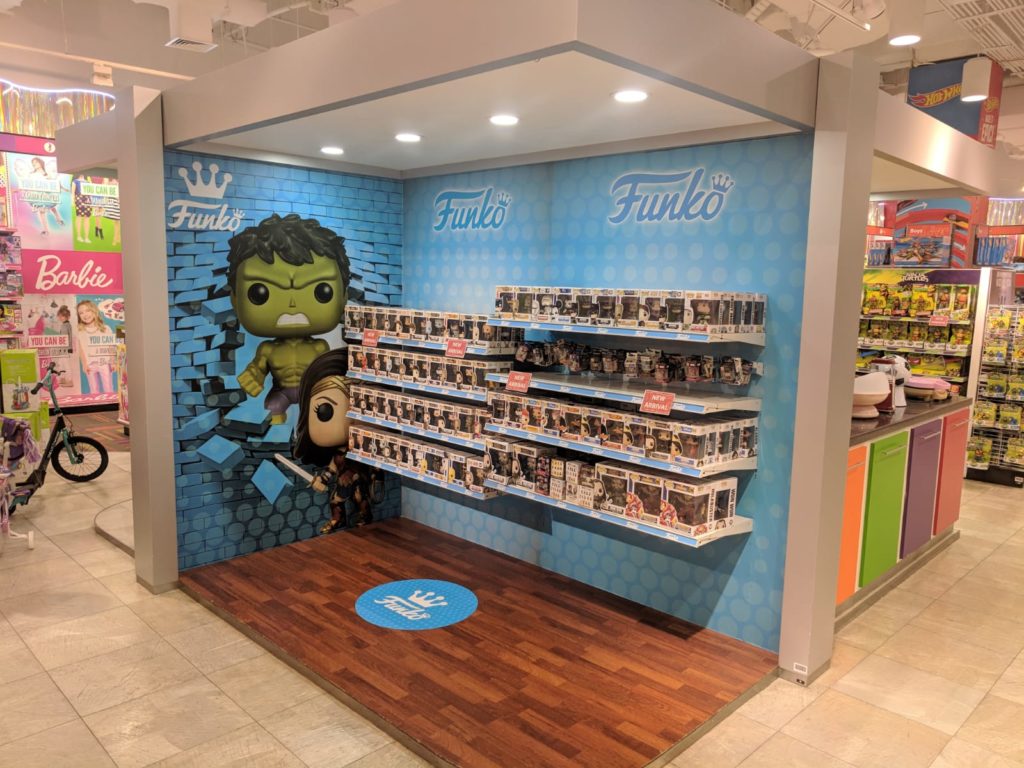 Fantasy World at The Avenues

I saw the products at Xcite and Xcite.com, but I wasn’t really surprised because Xcite get all types of products. It was still nice to have them on both the store and website. The only thing I didn’t understand is the way Xcite protects the product. Usually they use the RFID tags for expensive products, but it shouldn’t be the case for Funko Pop. 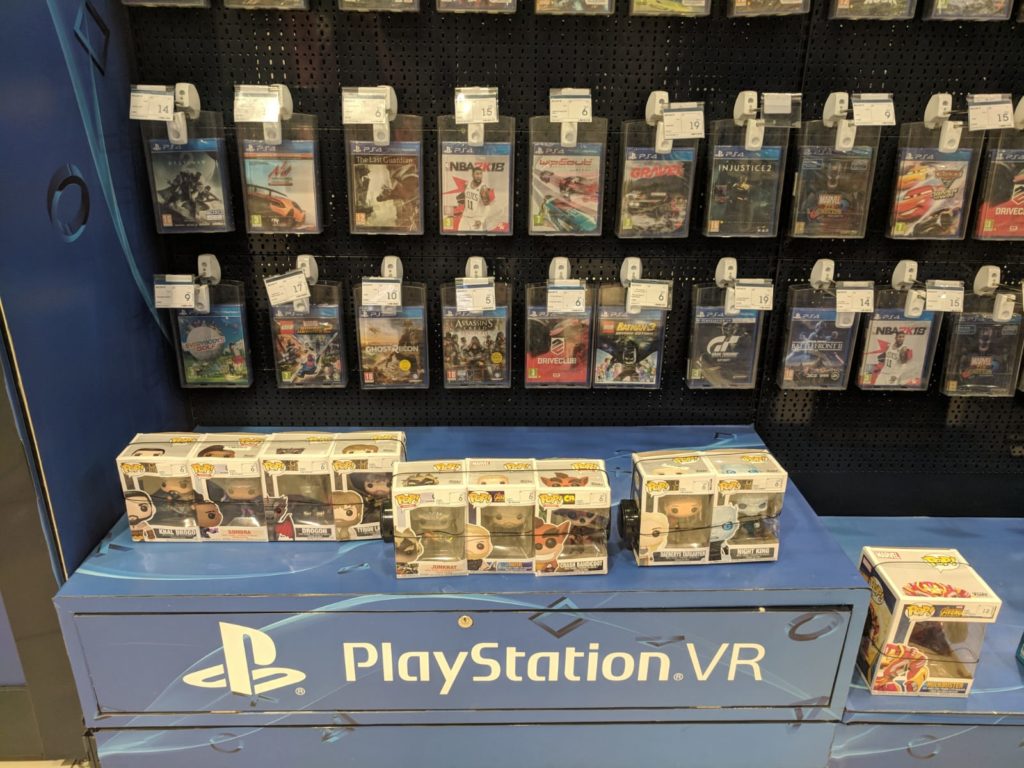 At Xcite Store in The Avenues 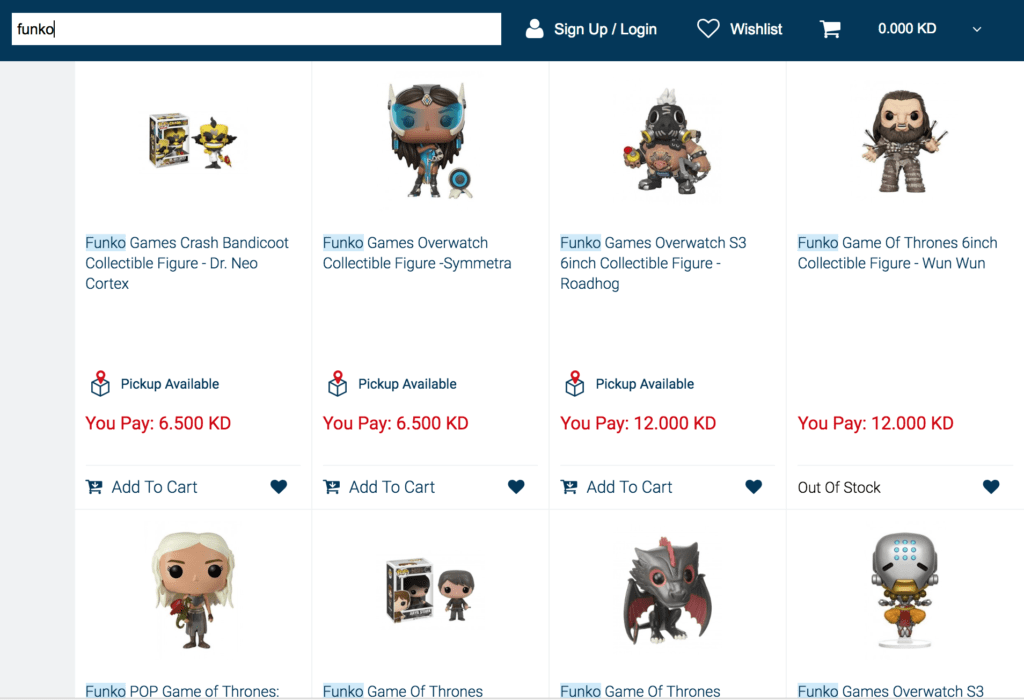 The product has always been available at Ufff and you can still buy them from Ufff.com or from their instagram page Ufff. Ufff.com is one of the best websites in Kuwait. They sell lots of Funko products and other toys and collectables. I like their website design a lot and their branding is really impressive 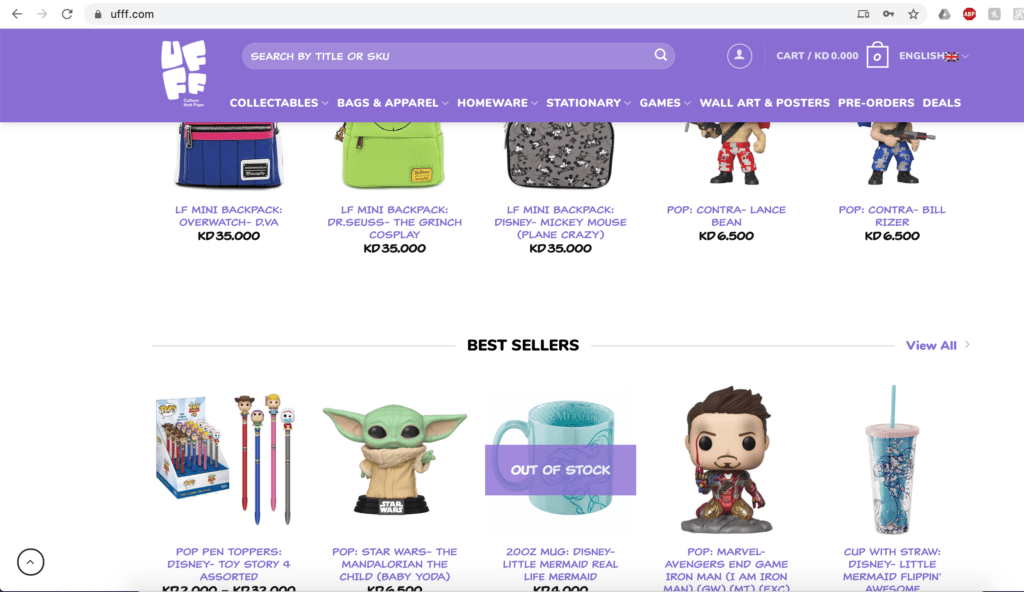 The place that I really didn’t expect to find Funko Pops at is Trolley, but it was a genius idea, because I saw the kids asking for them even though they were going to buy candy and chocolate. 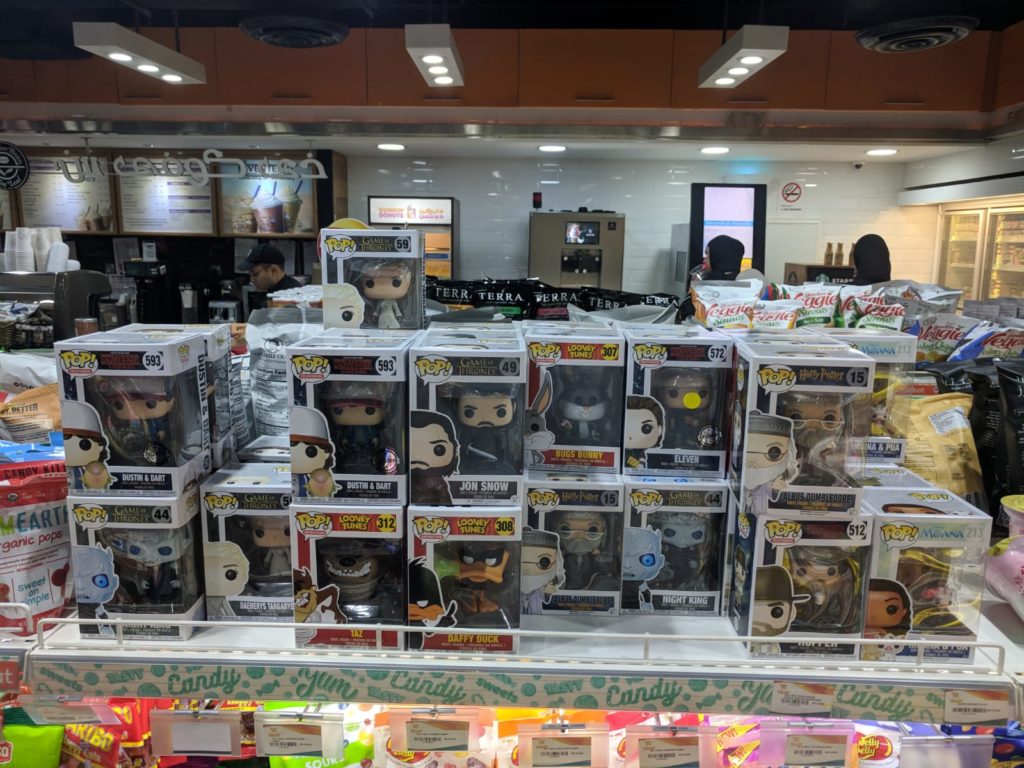 At Trolley in Qurtuba

It is really nice to find Funko Pops all over Kuwait, and I am happy to see such a great product being available even at convenience stores. When you think of buying a gift for anyone whether it is a kid, teenager, or an adult. They love getting Funko, and this is what I have been getting these days, whenever I need to buy a gift. I buy Funko Pop, and the most recent one I bought was Crash Bandicoot Funko Pop from Xcite at The Avenues. 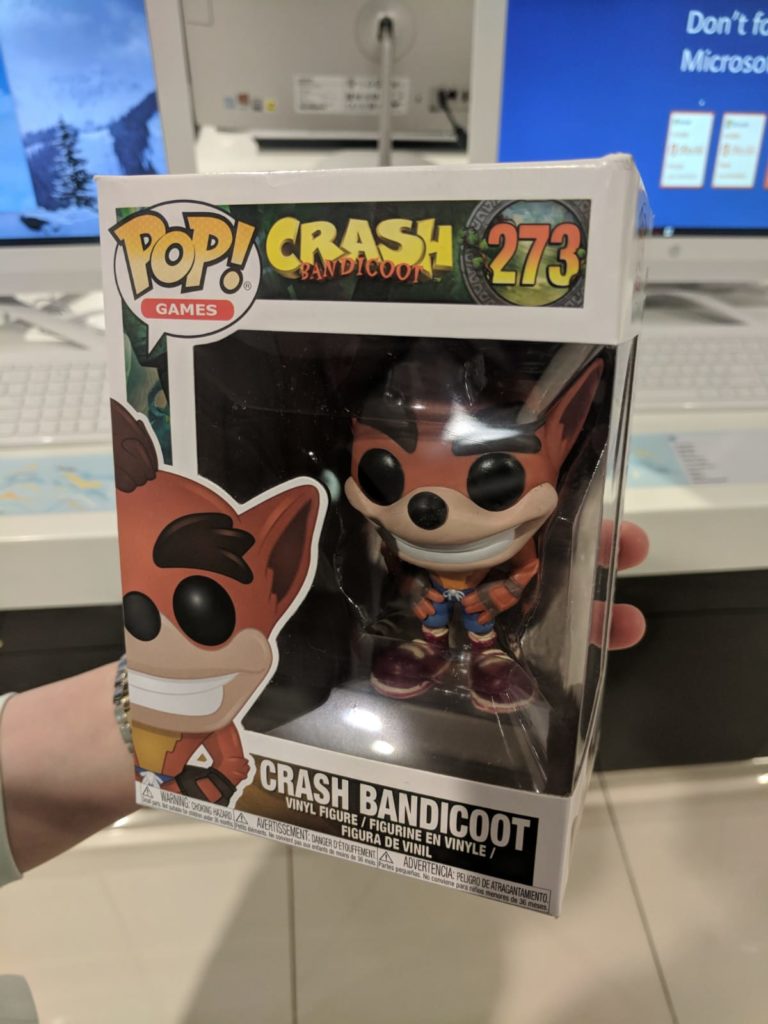 I have always been a video gamer, and I constantly buy PS4 & Nintendo video games to play in my free time. I also have a big collection of figurines, some are extremely rare by now and their prices went up 300-500%. I always buy video games and figurines from my very favorite website Pro Gaming . They also have an instagram page for those who doesn’t know how to order from a website. The last game I bought was Shadow of War, and it was totally worth it. I really enjoyed that game, and it was as good as Shadow of Mordor.